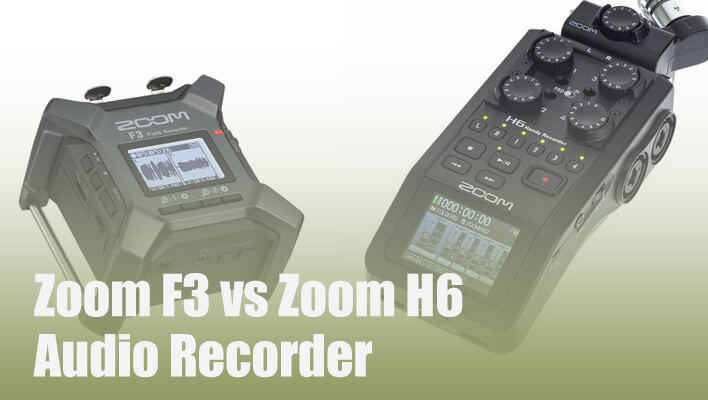 Good news, Zoom recorder fans. You’re now able to have higher recording quality with the diminutive Zoom F3 field recorder. And you may be wondering if you should choose the old Zoom H6 or the new Zoom F3 since they are both portable and at a similar price.

Zoom released the Zoom H6 in 2013 as a multiple-track handy recorder, and the company released the Zoom F3 in 2022 freshly as a mini handheld field recorder. While the units offer similar sizes, they have several differences in terms of design and features.

Zoom F3 vs H6 – They’re both small, but in different ways 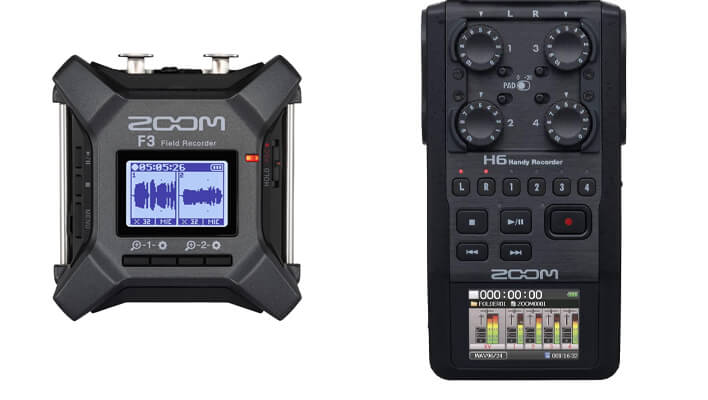 The portable Zoom H6 only weighs 280g if you remove the mic capsule from the recorder, and it’s pretty easy to carry with a dimension of 77.8 x 152.8 x 47.8mm. As a handy recorder, the Zoom H6 comes with a small display screen and you can see the physical level knobs and channel buttons on the front panel, the recorder doesn’t discard these physical controls for smaller sizes.

On the other hand, the F3 field recorder is also portable and it’s even more compact and smaller than the handy Zoom H6. Zoom claims that this F3 recorder comes with a small but mightly design and its specs say the dimension is 75.0 × 77.3× 47.8 mm, it’s much shorter than the Zoom H6 in terms of size. And its square body makes the whole unit more sturdy and robust, it also provides a more stabling feeling when connected to other devices thanks to its solid base and thick protectors.

However, It’s more comfortable to hold the H6 even though the F3 is smaller. The Zoom H6 is more ergonomic and it provides enough space for controlling and adjusting the tracks and recordings with the physical buttons. The F3 also provides a few operation buttons on the front, but these buttons work with the icon shown on the screen, it’s not as straightforward as the Zoom H6.

There’s no doubt that the Zoom H6 is more powerful and flexible if you need the recorder to work with multiple microphones at a time. That mic capsule allows you to start recording immediately without the hassle of cables and you can capture the moment in no time with the easy-to-use record buttons. Besides, the Zoom H6 is better when you take a look at the external mic inputs – there’re 4 XLR/TRS combo jacks while you only have two mic inputs with the Zoom F3.

On the other hand, that smaller Zoom F3 only comes with two locking XLR jacks. Unlike the versatile XLR/TRS combo jack, you need to use an adapter to get your devices with TRS cable working properly. Other than that, as a field recorder, even though it’s pretty small, the Zoom F3 doesn’t work with Zoom’s capsules and it doesn’t offer a built-in speaker for you quickly review the recordings. Unfortunately, the F3 doesn’t have a stereo line-in jack either.

“SMALL DESIGN, BIG SOUND”, that’s how Zoom describes the Zoom F3 recorder. Compared to the Zoom H6, the F3 supports 32-bit float mono/stereo recording so you can record up to 192 kHz sampling/32-bit float in WAV format. You may not be able to hear the difference that 32-bit recordings produce with ears, but when the 32-bit technology is actually useful with its full dynamic range and clip-free audio when you are doing some professional editings, you don’t have to worry about gain settings and clipping.

Also, the Zoom F series are utilizing different AD converters and preamps from the Zoom H series. Generally speaking, the Zoom F3 is better than the Zoom H6 in controlling noise levels. The Zoom F3 is the better sounding one thanks to its better preamps and limiters. However, if you are planning on recording regular dialog or youtube videos, the sound quality of the Zoom H6 is good enough.

Just many high-end portable audio devices, the Zoom F3 requires microSDHC or microSDXC which has a max capacity of 1TB. The Zoom H6 support SD card, SDHC card, and SDXC card instead of micro sd cards, and it is compatible with SDXC cards up to 128GB max capacity.

The Zoom H6 and F3 both can be used as a music interface through a USB cable. As a new model in 2022, the Zoom F3 finally has a USB-C connector, which has better data transfer speed, and you won’t go wrong with the symmetrical shape. Most importantly, you can find a USB-C cable easily these days.

As wireless technology pushes forward, a Bluetooth audio recorder is not that rare to find. The Zoom F3 allows you to use the Zoom BTA-1 wireless adapter by featuring a Remote connector. With the wireless adapter, The Zoom F3 is capable of being operated by the specially developed Zoom F3 App, and it supports iOS and Android both (Zoom claims that the Android App will be available in Spring 2022. Moreover, Bluetooth enables the use of the input of timecode to the F3 recorder. What is not good enough is that it is only compatible with Timecode Systems UltraSync Blue currently.

The Zoom F3 went on March 2022, with a $349.99 retail price. You should also opt for the Zoom BTA-1 wireless adapter by paying an additional $39.99 if you want this to be a Bluetooth-compatible recorder.

Compared to the Zoom F3, the H6 seems more cost-effective, you can get the Zoom H6 and the mic capsule included for only $349.99 as well.

Verdict – It depends on your needs

Normally, an F series recorder is fairly expensive. But you are now able to get excellent recording quality without emptying your pocket with the Zoom F3. The Zoom F3 vs. H6 face-off is a strong battle, but there’s a clear winner. The Zoom F3 wins in better sound quality, advanced wireless features, and sturdy field recorder design. The H6 has a lot going for it, not the least of which are its easy-to-operate design, versatile mic capsules, and its 4 XLR/TRS mic jacks.

1 thought on “Zoom F3 vs H6 – How to Choose The Right Portable Recorder?”