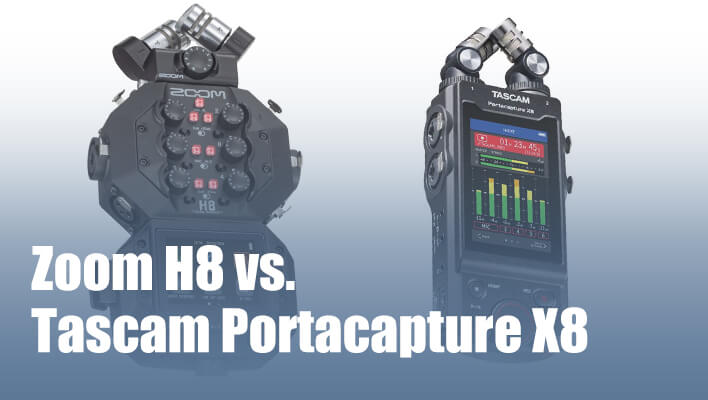 It’s been a while since Tascam released the Tascam X8, its most expensive handheld field recorder, and many people are wondering how this high-end handy recorder compares to the Zoom H8, another pricey multitrack audio recorder from Zoom.

Here we will pit the Zoom H8 versus the Tascam X8 head-to-head, comparing their specs and features, and recording experience. Also, there’re a few things that you wouldn’t know just by reading their product descriptions, here’s how they compare. 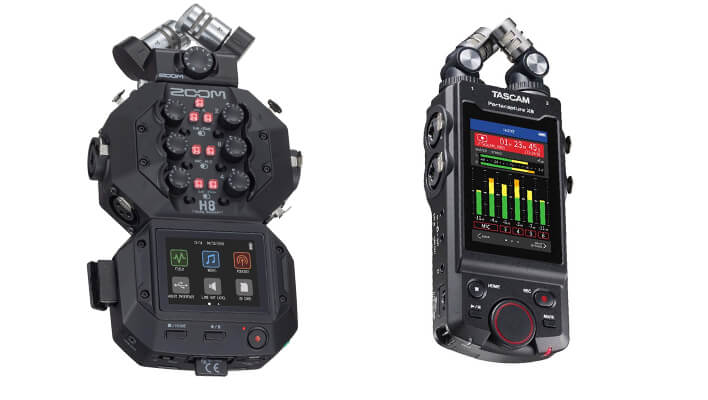 In the image above, the new Tascam X8 is on the right, with the previous classic Zoom H8 on the left. Without looking at the specs, I believe you already can tell the Zoom H8 is bulkier and larger than the Tascam X8.

As you can also see from the image, the Tascam Portacapture X8 recorder is more like a rectangle while the Zoom H8 has an octagonal body, which reminds me of a giant spider all the time. The Zoom H8 is designed like this for a reason: the octagon structure provides more inputs compared to the Tascam Portacapture X8 without making the Zoom H8 very long. The cons? It’s not straightforward to connect your external mics to the recorders as the mic jacks are in various directions.

Also, the Tascam Portacapture X8 is basically a recorder that fully relies on its touch screen, you don’t have many physical buttons and controls on the panel. This is different with the Zoom H8, which retains the level control wheels for each track. The size of the display on the Tascam X8 is 3.5 inches while the Zoom H8 only has a 2.4 inches small screen.

However, if you look at the built-in XY mics, the Zoom H8’s mic capsule is clearly more robust than the Tascam X8 with its solid base and thick frame.

Another difference is that the Tascam X8 requires microSD cards while the Zoom H8 saves files on standard SD cards. For me, the Tascam X8 is safer and more portable for me to use as you can hold it easily with one hand and won’t accidentally drop it to the ground.

An advantage of the Zoom H8 is that it has more mic jacks than the Tascam X8, even though the Portacapture X8 is the latest model from Tascam. Zoom claims that the H8 recorder can record up to 12 tracks including the XY mic capsule, 4 XLR inputs, 2 XLR/TRS combo jacks, LR stereo mix, and backup recording. Honestly, this was kind of misleading for me at first since there are only 8 inputs visible.

The Tascam X8 is a recorder that can record 8 tracks spontaneously (6 tracks + 2 mix). But what is good about the Tascam X8’s built-in mic is that they are removable and you can add new XLR mics easily. You can also achieve this with the Zoom H8, but you have to buy their accessory separately.

There’s not much to say about other ports as most of them are similar, they just put them on different spots. What you should know is, as a fairly new product, the Tascam X8 has an improved USB jack, rather than a USB micro B port that the Zoom H8 uses, Tascam X is equipped with a USB type C port.

The Tascam X8 comes with a bigger screen and it provides more room for you to operate and control the recorder. Meanwhile, the big touch screen has more recording presets than the Zoom H8, you will have 6 recording modes including manual recording, podcasting, music, voice, field recording, and ASMR, though most presets only allow you to record two tracks at the same time and the manual recording is still my most frequently used mode.

Besides, a big screen brings a huge benefit to the Tascam X8 – you can monitor and conveniently adjust all the tracks without touching the screen in manual recording mode. As for the Zoom H8, you will have to swipe on the screen to see all the tracks’ status. In addition, in the music recording mode, the X8 can add critical sound effects like reverb to music tracks. This is something that The H8 cannot offer.

Even though the Zoom H8 does not have that many recording modes (most of them are useless to me), it surprisingly has more sound pads for you to assign sound effects in the Podcast app compared to the Tascam X8’s Podcast that only offers two pads.

Many of the features of these two handheld recorders are similar to each other. But the Tascam Portacapture X8 offers a more advanced USB audio interface mode, which lets you record audio to SD card while using the recorder as an audio interface.

You probably have known that the Tascam X8 supports 32-bit float recording while the Zoom H8 can’t – does it make the Tascam X8 the recorder with better recording quality?

Well, according to my personal experience, most people would not need to use 32 bit recording. And you won’t hear any difference with human ears. Although most people will not take the advantage of the 32-bit float, the 32-bit float recording does help when you change the sample frequency in some of the post-production processes.

As for their preamps, they’re almost identical when working with external mics. Both of them provide decent and clear audio quality, and unnoticeable noise levels. Their built-in mics do have slight differences in the stereo image, but you can easily change it by adjusting the setting of the X-Y / A-B mics. So if you are fretting over which is better in recording quality, there’s no need to worry about it.

But at $399.99, you will only get the Zoom H8 Recorder itself and the XYH-6 mic capsule included. For adding additional mics or Bluetooth feature, you still need to purchase their accessories separately.

There’s not a winner in this battle, but I like the Tascam X8 a little bit better. It has a portable size with more recording mode presets, advanced and easy-to-use interface mode, 32 bit float recording. Moreover, it has built-in Bluetooth technology and better support for iOS and Android devices (Zoom doesn’t have an Android App).

But there’s a lot to like with the Zoom H8, it provides more microphone inputs and various expandable mic capsules, and you can quickly adjust the levels for each track with the physical knobs. And it’s more affordable and cost-effective compared to the new model in 2022.