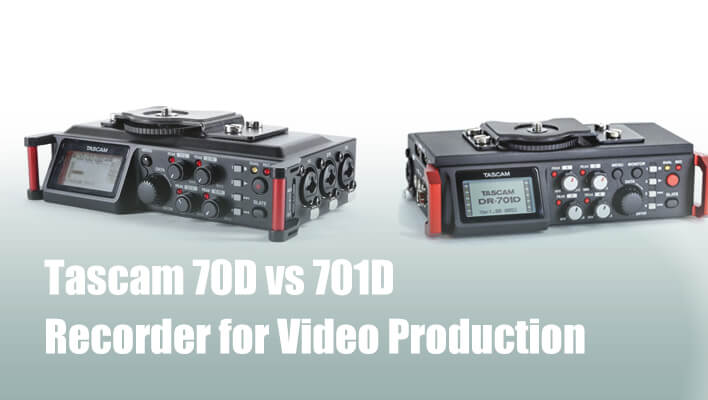 If you are looking for an audio recorder that works with DSLR cameras well, you probably have found the Tascam DR 70D and DR 701D are two models that are designed for use with your camera. And I guess you also found that the Tascam 701D and 70D are not in the same price range, so you might be wondering if it’s necessary to buy the more expensive 701D. Don’t worry, after reading this Tascam 70D vs 701D guide, you will make your choice confidently.

In summary, Tascam released the Tascam DR 70D field recorder on the market in late 2014. After a year, they announced that the DR 701D, the upgraded model of 70D, came out officially with new features and better recording performance in late 2015.

Since the Tascam 701D is newer and more advanced, does it mean you should go for the 701D without comparing? Well, after I tested both of them, here’s their differences and what I think:

So, what’re the differences?

Both recorders come with a simple black finish and a compact design, but the Tascam DR 701D looks more rugged as you can see the handle protectors are metal and they become thicker and stronger compared to the DR 70D. Moreover, instead of using a plastic chassis, the Tascam 701D has a magnesium alloy rigid and robust chassis.

Although the Tascam 701D and 70D look pretty similar at first glance, you will find their button layout are not exactly the same. Actually, some inputs and controls are in completely different places.

Another obvious difference is that the Tascam 70D has a yellow screen whereas the Tascam 701D replaces it with a blue screen.

Besides that, the Tascam 701D has a built-in SMPTE timecode generator so that you can connect the recorder with external devices through a BNC cable and the Tascam 701D will integrate SMPTE LTC into your camera system to help your video production and editing.

Other than that, the Tascam 701D has an extra 3.5mm lineout jack compared to the Tascam 70D. This additional mini-plug jack gives your more options when using other devices and accessories such as speakers and backup recorders.

When it comes to recording performance, both recorders have a built-in mic and 4 XLR/TRS combo jacks with phantom power for external mics. You can tell from the specs the Tascam 701D has better preamps and it supports audio resolution up to 192kHz/24-bit when recording 2 tracks and the Tascam 70D’s highest quality is 96kHz/24-bit. On top of that, the maximum number of tracks recorded simultaneously is 4 in the Tascam DR 70D and the DR 701D is a 6-track audio recorder.

One advantage the DR 701D has and DR 70D doesn’t is the monitor feature – which means you can monitor any individual track independently, this is a useful upgrade as the DR-70D only provides the entire stereo mix when you are recording audio.

Tascam DR 701D, as an upgraded model of the DR 70, has a few improvements that work with cameras better and enhance your recording performance slightly. Unfortunately, the slightly less noisy preamps are not that attractive for most people, and the HDMI feature is only compatible with DSLR cameras that have timecode output via HDMI. The biggest selling point of the DR-701D is the monitor feature while you will find this feature on other brands also.

After considering its pricing differences, I’m prone to say that the DR 70D might be more cost-effective. The DR-701D does have a few upgrades that are better than the old 70D model, but they are not enough for me to pay the extra money.