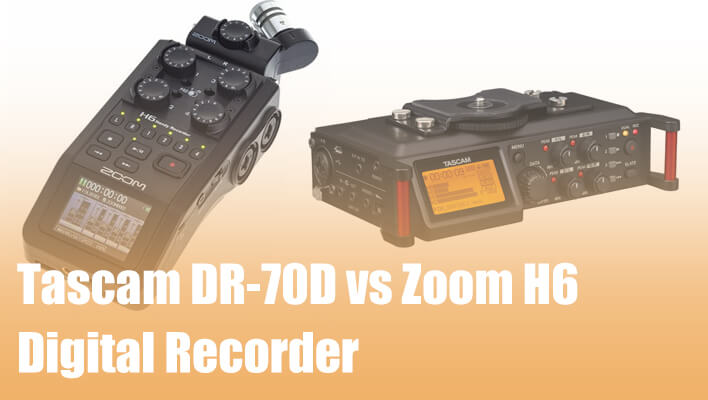 Even if you don’t need an expensive recorder, a portable recorder that comes with reliable recording performance and features is still necessary. If you have a budget of around $300, you must be aware that Tascam DR-70D and Zoom H6 are two great options you have.

Although Tascam DR-70D and Zoom H6 are products from different brands, they actually have lots in common. But, there are also some pros and cons you might not know about these two recorders – and we are here to help you to make an informed choice. 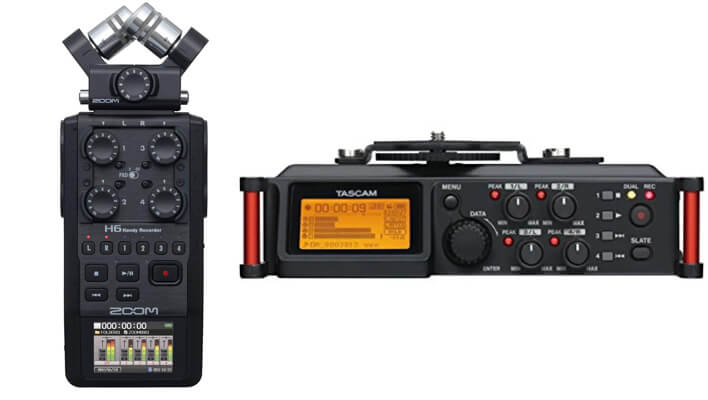 With the built-in XY mic, you can effortlessly get close to the audio source with the Zoom H6. Another advantage is that you can replace the mic capsules, and Zoom offers several optional choices for most of Zoom’s handy recorders to perform better in different environments without sacrificing portability and convenience. While you can’t do this freely with the Tascam DR-70D since its built-in stereo mics are not adjustable and you need to move the whole unit to reach the sound.

Tascam DR-70D can be easily mounted on DSLR cameras

But being a square recorder with a larger size actually brings some benefits, you can store the Tascam DR-70D in the recorder bag safely without wobbling. Besides, the Tascam DR-70D works with a tripod and your camera nicely with its built-in shoe and DSLR mount, this is not something you can’t find on regular digital audio recorders. For the Zoom H6, you need to purchase a hot shoe mount adapter separately to mount it on your camera, and it only works with one mount.

The Zoom H6 has a built-in speaker

When buying a handy recorder for casual use, experience is definitely on Zoom H6’s side. There’s a built-in speaker that allows you to playback the recordings while you don’t have earphones at hand. Unfortunately, there is no speaker built-in for the Tascam DR-70D, which means you need to use headphones to listen to the recordings or upload the recordings to your PC.

Zoom H6’s got easy-to-use buttons on the front panel with which you can simply start recording and stop recording. Also, changing microphones inputs are simple with the one to four button, this is super user-friendly and it’s perfect for using the Zoom H6 as a mixer when recording from various sources.

On the other hand, you can also conveniently start recording with the Tascam DR-70D. But when it comes to changing settings from mics, line-in inputs, even turning on phantom power, you need to go into the menu and change the settings by pressing a few buttons.

Tascam DR-70D is a better fit for DSLR cameras

Despite the Zoom H6 might be better for its portability, the Tascam DR-70D has more compatibility with DSLR cameras. As mentioned above, the Tascam DR-70D is more suitable for mounting on your tripod and camera. What’s more, there is a camera input for receiving and monitoring audio signals from DSLR cameras and a line-out jack that sends signals to cameras.

Zoom H6 can be used as an audio interface

The Zoom H6 beats the Tascam DR-70D for people who need to directly record to computer’s DAWs. The Zoom H6 has an Audio Interface feature, which allows you to turn the Zoom H6 into an external mic and you can use the Zoom H6 as a simple audio interface/mixer for recording audio to your computer.

As prosumer gears, these two recorders both support recordings up to 24-bit /96kHz BWF audio. But Zoom H6 offers a variety of MP3 formats as well.

The original Zoom H6 might fall short in terms of affordability, but Zoom released a new version called Zoom H6 all black in 2020, and the new Zoom H6 is much cheaper than the old model.

The new Zoom H6’s retail price is $349.99, and you can usually get the product at the price of $319.99. Meanwhile, the old Tascam DR-70D is still available on Tascam’s official site, and it costs $319, but you may have a better price on other online stores like Amazon or B&H photo video.

From my point of view, the Zoom H6 is more competitive in 2022. It’s portable and supports 6 tracks recording simultaneously. And the Zoom H6 features more functions such as audio interface and overdubbing. And according to the specs, the battery life of the Zoom 6 will last longer(about 20 hours of continuous recording). Most importantly, it’s not much more pricey compared to the Tascam DR-70D.

However, if you prefer a recorder that is more compatible with DSLR, the Tascam DR-70D is a great choice as it has built-in mounts and special jacks that are designed for working with cameras.